10 Reasons Parents Should Not Have Guns in the House 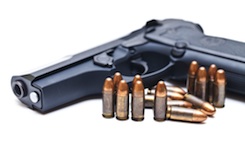 Children are infinitely curious creatures by nature, and always want to learn how things work. While this naturally curiosity is a great trait to have, it can also manifest itself by enticing them to play with things that can be harmful, if not fatal, to them. Children are well known for raiding all of mom and dad’s hiding spots and they will mess with anything from money to guns. The best way to avoid accidental shootings is for parents to not have guns in the house, and here are 10 great reasons why.

Whether it is childhood curiosity or an accidental discharge, guns can cause fatal injuries to people when they are not handled properly. The best way to keep children safe from guns is not to keep them in the home.

0saves
Save
If you enjoyed this post, please consider leaving a comment or subscribing to the RSS feed to have future articles delivered to your feed reader.
← 10 of the Most Important Things to Include in Your Nanny Contract | How to Snoop on Your Kid While He’s Online →