How to Communicate to Your Nanny She’s Done Something Wrong 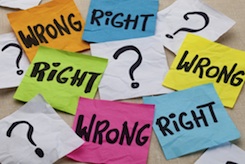 Finding a great nanny is one of the most difficult tasks that a working parent can undertake, especially in areas that have a higher concentration of families seeking childcare providers than nannies seeking families; finding the perfect nanny is downright impossible. Even if your nanny speaks three languages, holds an advanced degree in something related to childcare, loves your children unconditionally, and is never late or inattentive, there will be times when she makes mistakes. Approaching an adult with reprimands, though, is almost as difficult as securing a good nanny in the first place. Worded incorrectly or spoken in a fit of anger, accusations of wrongdoing or scolding her can spark a disagreement that ends badly, up to and including a nanny with no post and a family with no nanny. Handling these situations effectively and gracefully is always a challenge, but there are a few ways to help facilitate a productive discussion, rather than an outright argument.

Rebuking a nanny can be especially nerve-wracking for someone who’s never before had an employee or subordinate report to them, leaving employers that are new to the game either reluctant to broach the issue of problems or overly-enthusiastic about establishing their authority. Trying to strike a balance between lax and authoritarian can be a challenge, but it’s also something that can be accomplished.

0saves
Save
If you enjoyed this post, please consider leaving a comment or subscribing to the RSS feed to have future articles delivered to your feed reader.
← What You Should Include In Your Nanny’s Reference Letter | How to Monitor Your Nanny Without a Nanny Cam →